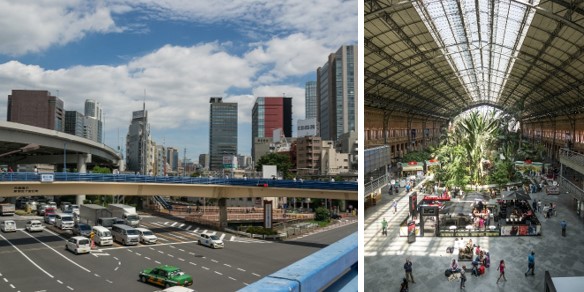 The reasons why we travel are directly related to how we build and plan our settlements. Travel has always shaped our towns and cities, determining where they are located, how large they are and the pattern of pathways and spaces within them. Sometimes the impact of transport systems has been detrimental to inhabitants’ well-being, such as an over-dominance of car traffic causing pollution, danger and inequality, or when the poor design of large transport infrastructure such as mega-roads dislocates communities and damages ‘the public realm’.

Travel, place, and human connectivity are intimately connected with physical, cultural and psychological perspectives. Thus, if the public realm is to successfully incorporate function, beauty, safety, a sense of belonging and also encourage sustainable travel, there is a need to design carefully good places and encourage journeys which meet these needs.

A history of placemaking and travel

• Settlements are often located at places where travel routes cross: where people can meet and exchange. The distance between settlements and the size of the settlement are related to the amount of time it takes to travel between or across them: on average a 30-minute journey (Marchetti, 1994). This means that, as the predominant mode of transport becomes faster (e.g. from walking, to horse, to train or car), the size of the settlement will grow – compare ancient Londinium to the metropolis of the 21st century. Travel also shapes the morphology of the city itself, with routes carved out according to the needs of its inhabitants and of their prevailing modes of transport.

The mentality of place and travel

• People may not always travel by the quickest routes since they may be influenced by their own mental maps, determined by habit, the weather, time of day, safety concerns or by the presence of other travellers. Users of different modes of transport may come into conflict, for example the domination of cars can be dangerous for pedestrians and cyclists, and can make it difficult to share the ‘public realm’. Meanwhile, buildings near transport infrastructure usually turn their backs to this in order to keep antisocial aspects at bay; the view from the train is most typically of the less showy side of cities—back gardens, sidings and industrial areas. Hence, the areas around a railway station have typically been of poor quality. This reinforces the feeling that major transport infrastructure is relegated to peripheral and less desirable locations, and strongly affects our perceptions when arriving in a city.

• In many cities around the world, cars have come to dominate the landscape, the impacts of which have not been helped by a move to segregate different road users. If we understand the mistakes of the past we can learn from these and make better decisions in future. It is particularly important that we look at the characteristics of each place and that we build with the future in mind.

During the past decades heavy attacks have been made on the space available in the city by the great number of cars and the amount of traffic, which has increased proportionately. On account of this situation the size of pedestrian areas have been reduced. The car has rolled into the city like an assassin; by now most city-dwellers – either in their role of pedestrian or car-driver – have lost the ability to observe changes in the use of space in the city caused by the presence of car. But the car remains a dream come true. ‘Because the Car Has Come to Stay’, Otto Das in A. Smithson’s AS in DS (1983, p.4)

• Transportation technology developed rapidly over the 19th and 20th centuries, changing our cities and the way we lived. But since then relatively little has changed and there are not yet obvious technological revolutions on the horizon. We must make do mostly with building up and densifying the urban areas we already have. The challenge, therefore, is to make our increasingly populated cities not only tolerable to live in, but enjoyable, healthy, convivial and sustainable.
• In this scenario, the role of good quality public space cannot be underestimated.
• We can build better places for movement by responding to the diverse characteristics of each place and adopting a human-centred approach rather than a one-size-fits-all solution.
• We should plan for the ‘long-now’ (Brand, 1999), fully considering the needs of the future in order to design good places and journeys for all.

Marchetti, C. (1994) ‘Anthropological invariants in travel behavior’, Technological Forecasting and Social Change. 47 (1), September 1994: pp.75–88.
An influential academic article which argues that in all cultures across the globe and throughout history humans allocate on average one hour per day to travelling and that this “quintessential unity of travelling instincts” can explain the way humanity has formed its settlements

Project for Public Spaces (2009) From Place to Place: Reinventing Transportation Planning with Placemaking https://www.pps.org/article/from-place-to-place-reinventing-transportation-planning-with-placemaking
An article from PPS, a US-based non-profit organisation committed to helping people create community-powered public spaces. The article highlights some initiatives which are helping communities rethink how to connect people with the goods, services and destinations they need and desire.

Venturi, R. et al., (1977) Learning from Las Vegas, Cambridge MA: The MIT Press.
A seminal book in which the authors argue that the speed enabled by the automobile, by distorting a driver’s perception of space, has called for a hybrid form of architecture/landscape which prioritises visual communication over other spatial qualities.

How do the places where we live affect our travel motivations, and how can the built environment influence travel behaviour?

If certain kinds of travel are important for our well-being is it possible to create places which enhance these benefits?

How can we design complementary transport infrastructure and public space when there are seemingly so many competing constraints?